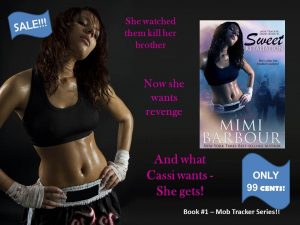 This book has been a revelation to me. In fact, the whole series has worked its spell. I’m writing the fourth and final book for the series now called Sweet Endings and I’ll admit that it’s been bursts of magic mixed in with a hell of a lot of hard work.

Every once in a while, an author begins a new story, and as soon as it starts, the character takes over. This happened to me. I pictured this girl in my mind, a librarian whose personality had to be that of a shy, scared, insecure miss who did nothing when she watches some mob members kill her twin.

After that incident, she changes into a person who feels such revulsion for her behavior that nothing matters except that she seeks revenge for the death of her brother. How can she live with herself if she doesn’t?

“Keep down.” Rough, his hands hurting, he pushed her head under his chest while she wiggled to get back to Raoul. “Stop it. You’ll get us both killed.” His voice, hard and angry, drew her attention. She shook away from his hand and looked at him, trying to explain that the injured man was her brother and he needed help. When their eyes met, the bit of light from the building’s illumination revealed his face.

*** Sweet Retaliation is book #1 in the Mob Tracker Series.

Other books in this series are: