How do you become involved in another person’s life? Usually you talk to him, and learn about what is going on. Where he’s having problems and needs help. Last century, the telephone was invented, and people could now talk to each other even over large distances. People communicated, and reached out to each other.

Compassion is caring for another

Then, in this century, with the invention of the cell phone, texting became the normal way of communicating. Everyone texts, it seems, short sentences sometimes with the words shortened to U and FYI, which require an interpreter to read them. People text while they are walking in traffic, while shopping, while in a class, but worse, people text while they are at home, asking a question of someone else. How involved can you become when you can’t even hear the other person’s voice, whether he sounds tired or discouraged or happy or defiant? How do you know that this person needs the compassion or friendship you are willing to give him?

Texting, a tool of isolation

Instead of becoming an aid to communication, texting on cell phones has become a tool of isolation. Many people isolate themselves at home, reaching out only through texts. Teens shut themselves in their rooms, when they should be out developing social skills needed for life. Texting should never replace conversation, which is how we interact with other people. When you talk to someone, you find out much more about him and his life, his feelings, and thoughts; more than you will ever find out by texting. Texting is great for setting up appointments, but it should not be used to as the sole way to sustain friendships. Everyone needs friends, as man is a social being.

Cell phones have replaced our computers, watches, alarm clocks, maps, and our way of communicating. Lets not let them replace our families and friends.

In my book, Turnagain Love, the heroine is isolated on a small island. With no cell tower close by, she can’t call for help. Since three of anything—three large rocks, three honks, three shouts—is the universal signal of distress, she places her white clothes into three groups, making three large white circles out on the beach. Her efforts are rewarded by the arrival of the hero in a large motorboat. But he hasn’t come to help her. If fact, he never even noticed her signal. So what is he doing?

In another book, Terminal Pursuit, the main characters have thrown their cell phones away to keep from being tracked. They now have no way of getting in touch with each other as they try to evade the killers.  Terminal Pursuit is in the set: Unforgettable Temptations. During Christmas, an angel comes to the rescue, the hardest decisions are made, assignments turn deadly, choices are made, lovers realize they are meant to be together, dreams come true, true love comes from distracting romances, and old loves show up in the nick of time.

Carnations & Hot Toddy Kisses (new): Stacy Eaton, USA Today bestselling author: Is it destiny or fate that brings the past and present together?

Burning for the Nanny (new): Suzanne Jenkins, USA Today bestselling author: When Firefighter Leon Saint gets a surprise visit from a one night stand, a beautiful neighbor with a reputation comes to the rescue.

Because You Said So (new): Dani Haviland, USA Today bestselling author: Sometimes that’s all it takes.

Holiday Love: Natalie Ann, USA Today bestselling author: Can the magic of the holiday make these coworkers realize they are finally meant to be together?

Once Upon a Christmas: Denise Devine, USA Today bestselling author: When old friends reunite, will a new enemy keep them apart?

The Right Kiss: Mona Risk, New York Times & USA Today bestselling author: What’s a girl to do when she dreams about another man while in her fiancé’s arms?

Her Christmas Secret: Alicia Street, USA Today bestselling author: Lila courts a cold-hearted investor for her handmade toys, but finds herself instead drawn to a handsome maintenance man. With her sister’s family on the line, a distracting romance is the last thing she needs.

Do you remember your first love?

I do. I married him! That’s right, I married my first love, who I met when I was 13 and he was 16. We started dating and have been together ever since. We’ll be married 25 years this May and it’s been the best 25 years of my life!

But not everyone has their first love so young. Or do they marry them. That’s the case in my newest book from the Love Collection, First Love. Lauren Towne has had a tough life. A good work ethic and a lot of determination are the keys to changing her lot in life. The last thing she needs to focus on or worry about is her new sexy boss that might just end up making all her hard work vanish in the air when he realizes how attracted she is to him.

Jace Stratton always knew he’d be the heir to his father’s grocery store empire. But before that happened, he was determined to make a name for himself. When his “rule with an iron fist” father falls ill, he finds his timeline pushed up faster than he’d hoped for. Now he’s out to prove that even though he’s falling for an employee, he’s nothing at all like his father and never will be.

You can purchase First Love for just 99 cents or read for free on Kindle Unlimited.

First Love is also part of the Sweet & Sassy Cinderella collection which will be up for pre-order soon! Keep an eye out for it! 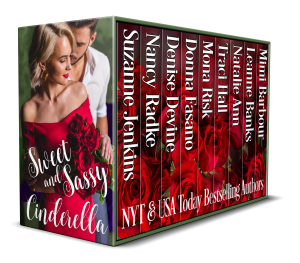 One last thing and so important: Please be sure to check out our Authors’ Billboard Monthly Contests for free ebooks, gift cards, and paperbacks. March is going to offer another Rafflecopter, so don’t miss out!