Now that summer has officially hit most of the US and school is out, people tend to have vacation plans.

Are you looking for a quick book to read while you’re sunbathing by the pool? How about in the hot tub with a glass of wine next to you? By a campfire at night while roasting marshmallows?

I used to love reading longer novels, but lately, I find I enjoy the shorter novellas. Some can take less than an hour to read, others just two to three hours.

It’s a great way to pass a little bit of time and read a book from start to finish all at once…while sitting on the beach under an umbrella.

It finally hit me. If I enjoyed reading them so much, why not try to write some? So that is what I did. In April I published the first of my Love Collection and have released one a month since. All my novellas are stand-alone stories that are a collection rather than a series. They can be read in any order and usually within two to three hours. The best part is, they are only 99 cents each! And if you’re part of Amazon’s Kindle Unlimited program you can read them for free.

Check them out and enjoy! A funny thing happened on the way to writing this Valentine post. I didn’t get Blame It On Chocolate, a new entry in my short story series, A Moment in Time, finished.

Agh! Life has just been plain difficult since the New Year began. Of course, that was how 2016 was so I don’t know why I’m surprised!

This highly sensual romance short story should be available at all ebook sellers within a day. For now, it’s only at Smashwords and Amazon Kindle, and it’s only 99 cents.

In 2015, I thought it would be nice to start a short story series for all those little ideas that pop into my head. Thus A Moment in Time Romance was born.

After all, A Moment in Time is all the heart needs for Love to blossom. 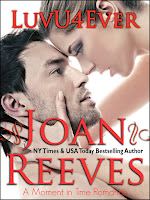 The first short story was LuvU4Ever, and it was about Noelle and David Morales at a crisis in their marriage.

This past Christmas I started writing Last Chance New Year in which David and Noelle play matchmaker for two of their employees who are obviously in love with each other but haven’t done anything about it. They don’t know it, but one of those employees has also decided to remedy the situation. , better known as C. A. Smith to her co-workers, decides New Year’s Eve is the perfect time to give in to insanity and throw herself at Luke Harper, the man she loves, and hope that he catches her.

By tomorrow, Last Chance New Year should be available at all ebook sellers.

As I said, it’s live only at Smashwords with Kindle for now.

A Taste of Chocolate

Actually, it’s a taste of Blame It On Chocolate which should be ready to publish in a couple of days. Here’s a teaser to whet your appetite.

Excerpt, Blame It On Chocolate by Joan Reeves © 2017

In years to come, Chloe Elliot decided if she ever told anyone about this night that she’d blame it on chocolate. Okay, maybe that and the bottle of Merlot she and her best friend and sister-in-law Sarah had drunk with the Valentine chocolates from the heart-shaped box Sarah’s husband—and Chloe’s big brother—had given his wife.

At the moment, Chloe’s heart beat so hard and fast that she ought maybe she was in danger of having a heart attack. Wouldn’t that be just peachy? They’d find her dead in this closet. Wearing nothing but red hooker stilettos and outrageous, hot pink lingerie beneath her khaki trench No way. She willed her heart to settle down. Besides, she was too young for a coronary, wasn’t she? She’d just turned thirty today. A Happy Fricking Valentine’s Day and Happy Birthday combined. What a catastrophe.

Don’t panic, she told herself again. She wouldn’t have a heart attack. She didn’t dare. What would her mom say if she was found dead—like this!—in the coat closet in her brother’s insurance office? And her dad? She shuddered at the thought.

Chloe took a deep breath and released it slowly. Then another. The roaring in her ears subsided enough that she could hear the sounds beyond the closet door. Nothing. Maybe Hunter had left. Please God let that be the case. She pressed her hand over her heart to still the wild pounding, certain it was beating so hard that it interfered with her hearing.

She listened intently. Nothing. Oh, thank the good Lord above. Relief made her weak in the knees. She swore to go to church every Sunday and to never, ever, do anything remotely crazy again. Her hand was on the doorknob when she heard his voice. Goosebumps raised on her overheated skin. Who was he talking to? She didn’t hear another voice so she decided he must be on the phone. Slowly, she removed her hand from the doorknob and held her breath.

No one had a voice like Hunter Cole. Instead of baseball, he should have gone into broadcasting or acting. She imagined that voice could charm a woman out of her panties as easily as the perfection of his hard-muscled body. Even in high school when he’d been a senior, and her brother’s best friend, and she’d been a lowly freshman, one look at him had turned her brain to mush and her body to molten lava.

Why couldn’t he just go away?

Chloe’s feet hurt in the crippling stilettos, and she needed to pee. Plus, she could hardly breathe in the confined space. At least her nerves had settled so she might as well wait it out.

A little of his conversation seeped through the door. She strained to hear what he was saying.

“…a dozen of your best red roses…big heart-shaped box of chocolate…address…tonight even though it’s late.”

Chloe’s heart no longer pounded. It might have turned to lead in her chest or maybe plummeted to her toes. He was order flowers and chocolates for a woman. Another woman. Not for her.

Now she didn’t feel just ridiculous. She felt humiliated. How had she let Sarah talk her into this? If Sarah knew Hunter so well, why hadn’t she known that he was interested in a woman? She’d never had a chance. If she’d known Hunter was seeing someone, she’d never have done this. She felt a tear trickle down her  cheek. She swiped it away, determined to shove her stupid fantasy to the back of her mind. And she would just as soon as she escaped the closet.

Silence now filled the office. Had he finally left? Surely it was obvious to him that her brother hadn’t asked to meet him here. He should be leaving and racing over to his honey’s house to reap the rewards of the Valentine gifts that were probably being delivered at this moment.

Nothing had broken the silence for almost five minutes. Relieved, she opened the closet door and stepped out. I hope you enjoyed that little teaser. Have a wonderful Valentine’s Day with your true love.

Joan Reeves writes sexy Contemporary Romance Novels–available at most ebook sellers. Check out her Amazon Author Page for a list of books.  (Audio editions available at Audible, and iTunes.) All of Joan’s books have the same underlying premise: “It’s never too late to live Happily Ever After.” Sign up for Joan’s Mailing List/Free NL and receive a free ebook. Connect with Joan Online: Blog * Facebook * Twitter * YouTube.