One of the great blessings of childhood is a vivid imagination. A child can make a blanket into a tent or a robe, a stick into a sword or scepter, a couch into a castle or mountain. Give a child a cardboard box and he will find more uses for it than just a packing container.

The simpler the object, the easier it is to turn it into a versatile plaything. Give a child an object that is too refined, like a toy kitchen set, and it cannot be “imagined” into anything else. When I teach Bible classes, I use blocks and marbles for towns and people.

As we age we sometimes lose that kind of ability to imagine objects as anything but what they are. Instead, we go into our minds and travel or dream from there. With the present stay-in-place requests by the government, many of us understand what solitary confinement entails. It gives us plenty of time to dream. At least we have the Internet, with Netflix and online shopping.

What are you doing that uses your imagination? Cooking new recipes? Playing new games with your children? Becoming a schoolteacher since your children are staying at home? If you want a free way to teach your child to read, go to www.raisingupgiants@wixsite.com/free where I have a free reading program. My seven-year-old brother taught me to read at age four, so learning to read is fun, at least the way I show you.

My last book out was Avalanche Puppy, which is part of a new Authors’ Billboard Amazon 99 cent collection, Unforgettable Joy. I wanted to put some humor in it, so I made my dog, Brat, a Border Collie. Brat wants his own way, which includes building his “herd” of his owner/trainer and the young man who wants to act as his handler.

Border Collies are high-energy dogs with minds of their own, and it was fun to write about him. They will nip at your heels to try to herd you together, and when you protest, will just “smile.”

As usual I’m writing another story and planning more. My second-chance-at-love story takes place at a dude ranch, where the new cook turns out to be the woman the owner had dated in college. He hadn’t recognized her married name when he hired her. Then the woman he is currently interested in shows up as a guest. Her name has also been changed as she is in the witness protection program. This story will be part of “Sweet and Sassy in the Summertime”, which is due out in late June.

So use your imagination and chase away boredom. If you need help, remember to go to our Authors’ Billboard monthly board and join our Easter Egg Hunt contest. I have four books on the board, all of which will be free on different weeks, including this week.

Whether it’s an old one-eyed cat you started feeding as a stray or a custom-bred ‘designer dog’ you paid thousands of dollars for, all pets are priceless. Or should be considered as such. They’re a limited time joy, their unconditional love unmatched by emotional two-legged humans. 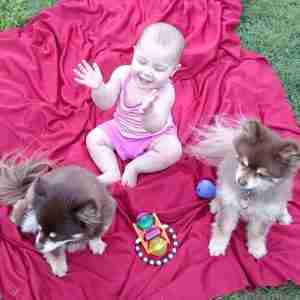 Granddaughter Ruby and her Pomeranian guardians 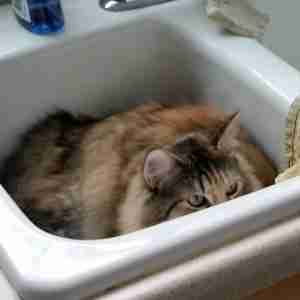 If a box isn’t available, the sink will do!

A dog’s wagging tail (or a stub of one) when you enter the room and cat’s snooty aloofness when you find him in your favorite chair, daring you to remove him, (his way of saying, ‘Pick me up and hold me, too!) go beyond words.
Yes, it costs to be a responsible pet owner, but here are a few priceless—or at least low cost—hints on how to keep your home cleaner and maybe more enjoyable for you and your pet.
Sheets and shedding. Almost all cats and most dogs shed, and seem to enjoy lazing on beds. I found that laying out a simple yet colorful sheet on top of my bedspread is a great ‘hair and dander’ catcher. I wash it once a week, rotating it with another colorful sheet so the bed is never bare. After all, it’s much easier to wash a sheet than a fluffy comforter! Make sure you dry your sheets in a dryer with a dryer sheet and a clean lint trap. You’ll be surprised, and a bit grossed out, on how much shed fur it traps!
Keep a towel near the door during rainy and snowy seasons to wipe down the dog when he comes in after his outdoor duties. If you make it a loving experience, they’ll not fight or try and get away. This saves lots of frazzled nerves from keeping wet pets off clean floors and/or furniture.
Cleaning cat boxes is a necessary chore, but doesn’t have to be labor intensive. I bought an amazing cat box, manufactured in Canada. Omega Paws is a ‘roll me over’ enclosed box that traps the cat litter clumps in a drawer. After inverting the box, simply pull out the trap drawer on the side and dispose of the waste in the trash. I bought mine on Amazon (http://amzn.to/2mI3Tej). Just make sure you use clumping cat litter. No matter what type of cat box, though, a nappy rug under and in front of it catches loose litter from kitty paws. Shake regularly to limit litter spread to the rest of the house.
If you live in an area of the country where fleas and ticks are present, make sure you use a once-a-month deterrent such as Revolution. Oregon is famous for the prevalence of fleas, yet I’ve never seen one nor had to deal with ear mites. I stay on top of the regimen because prevention is so much easier than eradication. Call your vet about what he suggests (department store brands have been known to kill dogs!) and ask if he gives quantity discounts. Mine buys the product in bulk and offers a deep discount if I bring in my small dogs for their monthly dabs on the back of the neck. Buy four packages get one free is also an option with some vets.
Do you love men who love critters? Read about Jay, the young mechanic who has a way with feral cats, and a young woman’s heart, in Kit Kringle: An Alaskan Tale. Part of Unforgettable Christmas (only 99 cents for the whole box set). 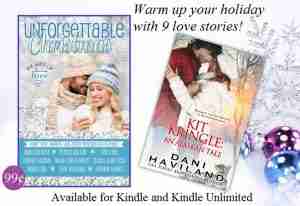