How delicious do these caramelized ribs look? And best of all – they are simple to make.

The ribs are ingeniously caramelized in a sugar mixture to start, which browns and flavors them. They are then braised in a soy sauce broth that’s studded with fragrant spices, including cloves, star anise, and a small handful of Sichuan peppercorns, which deliver an invigorating heat to the glaze on the meaty bites of pork.

Besides being delectable, these ribs are deceptively simple to make.

They require minimal attention after they’ve been caramelized. The most time-consuming part of this dish, once you’ve sourced the ingredients, is counting out the spices.

It’s a great party food as it benefits from being made ahead of time: The glaze permeates the pork as it sits.

Feeling brave? Ready to try something spicy and delicious to entertain your friends or family?

Here are the ingredients:

In a large, heavy bottomed pot, heat ¼ cup of the vegetable oil over medium heat until it begins to ripple. Add the sugar and stir until combined and the mixture turns caramel brown, about 7 minutes; don’t let the mixture burn. Carefully add the ribs to the pot. Cook until they begin to brown, 1 to 2 minutes per side. Transfer to a large plate, with any caramel that clings to the ribs.

Clean and dry the pot thoroughly. Add the remaining 1/3 cup vegetable oil to the pot and turn the heat up to high. Add the cinnamon sticks, bay leaves, cloves, star anise, and Sichuan peppercorns. Fry, stirring constantly, for about 1 minute until fragrant; don’t let them burn.

Carefully remove the bay leaves from the pot, taking the pot off the heat, if necessary. Add the ribs and stir to coat with the seasoned oil. Add 2/3rds of the scallions, plus the ginger, cooking wine, and soy sauce. Stir, and cook for 3 minutes. Add 2 cups of water and bring to a boil. Cover the pot, reduce the heat to low and simmer for 30 minutes.

Uncover the pot and raise the heat to high. Add any remaining  caramel and boil until the sauce is reduced to a glaze, 25-30 minutes.

If no one is watching the game, blame it on the ribs!

Have a wonderful Super Bowl party, but keep the party safe and small! 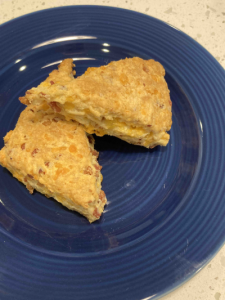 Hello! Donna Fasano here. Recently, a good friend of mine told me she’d made a batch of cheddar cheese and bacon scones, and the recipe sounded SO delicious, I had to try it for myself. For my first batch, I used cheddar cheese. I will soon try the recipe using Swiss cheese and I’m certain that will taste good, too. My Cheddar Cheese and Bacon Scones adventure resulted in a light, flaky, and extremely flavorful biscuit-like treat. As you can see from the picture, I cut my scones into triangles rather than the circles called for in the recipe. (When I traveled to Europe, every scone I ate was 3-sided not circular. But you cut yours however you wish.) I hope you enjoy this recipe.

Combine flour, baking powder, baking soda, and salt in a bowl. Add the butter in chunks and work into the dry ingredients until mixture resembles coarse meal. Stir in the bacon and cheese.

Mix the egg and buttermilk together and add them to the dry ingredients. Mix until a soft dough forms. Do not overwork the dough.

Roll or pat the dough on a floured board to a 1/2 inch thickness. Cut out circles with a cookie cutter. Place scones on cookie sheet. Bake 12 to 15 minutes or until scones are golden and well risen.

There is nothing better on a chilly autumn afternoon than a cup of hot tea, a yummy scone, and a good book. Here are a few of my romances that are very inexpensive… less than $1 each. 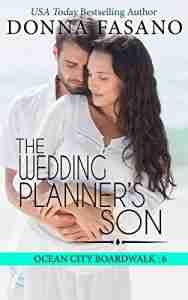 Hey, baby, it’s COLD outside! I live on the east coast of the US and we’re experiencing bitter cold temperatures this week. I decided the best way to warm up my house would be to turn on the oven and bake something delicious. This is the perfect winter recipe! Apple Banana Bread contains no eggs or dairy, yet it turned out delicious: light, moist, and full of flavor. This makes a wonderful afternoon “tea time” or “coffee break” snack.

The older I get, the less I like cold weather. How do you feel about winter?

Donna Fasano is a USA Today Bestselling Author. Her books have won awards and have sold 4 million copies worldwide. Sign up for her newsletter to learn of new releases and book sales. New review! “This is a great story. I loved Fiona & Di. Very good storyline, believable, moved at the right pace, characters you rooted for & sympathized with. I highly recommend reading this.” 5 stars Have plain ol’ brownies ever made you yawn? Here’s a pick-me-up that is sure to make you smile. When the box of brownie mix sitting in my pantry made me say, “Meh,” I knew I needed a solution. Quick. So I concocted this fast and easy fix that will turn ordinary brownies into extraordinary! I’ll never look at brownies the same way again.

I call these Double Chocolate English Toffee Brownies and my husband LOVES them.

Bake a batch of brownies as directed on the box. As soon as you pull the pan out of the oven, sprinkle the brownies with 1/2 cup of semi-sweet chocolate pieces (use more, if you like). I use Nestles Mini Morsels because they melt faster than the regular sized chocolate chips. Wait about five minutes and then use a butter knife to spread the chocolate evenly over the top of the brownies. While the chocolate is still lusciously melty, sprinkle about a cup of Heath English Toffee Bits over the top. Wait until the brownies cool and then cut into squares. Delicious!

Do you have a quick and easy fix that changes a recipe from ordinary to extraordinary? Please share in the comment section below.

While I have your attention, can I tell you about the newest book in my A Family Forever Series? A REASON TO BELIEVE is a cute little fairy tale that’s chockfull of Irish Folklore. It’s available in ebook and in paperback. I hope you’ll look for it! About the book: It seems like a grand idea, temporarily trading her pixie wings for a womanly form to help handsome widower Paul Roland with his baby girl. And the moment she holds the precious bairn in her arms, Fern knows true happiness for the first time.

But Fern never anticipates the dizzying emotions she feels for the man who not only needs her as a nanny, but as a woman whose passion can heal his wounded heart. Suddenly the forbidden fairy rule she gently bends because of the baby is in danger of being irrevocably broken.

Some things are meant to be…

Have a safe and happy holiday!

"Thanks for stopping by today!   We hope you enjoyed what we shared with you today! Please take a few moments to share with your friends using the share buttons below. Subscribe to our blog so that you don't miss a single post. ->>   And be sure to subscribe to our newsletter, get some free books and then get a note containing sales and new releases each Friday."