I guess I’ve mentioned I’m a former horticulturist, but I was also a floral designer for many years, and began doing wedding flowers for several local florists while I was still in college. After graduating, I kept the business going for a very long time, even while I was working other full-time jobs.

So what finally stopped me??

We have some fantastic wedding anthologies coming out this month, and I’m proud to be included in two of them.

Also, Two Hearts Under Fire (Two Hearts Wounded Warrior Romance Book 8) will be included in Love Under Fire, releasing November. The details are down below if you’d like to join our reader group to meet the authors and win prizes and giveaways. I’ll be participating on June 9, but we’ll have something happening every day until the 21st.

Have a wonderful June and Happy Reading!! 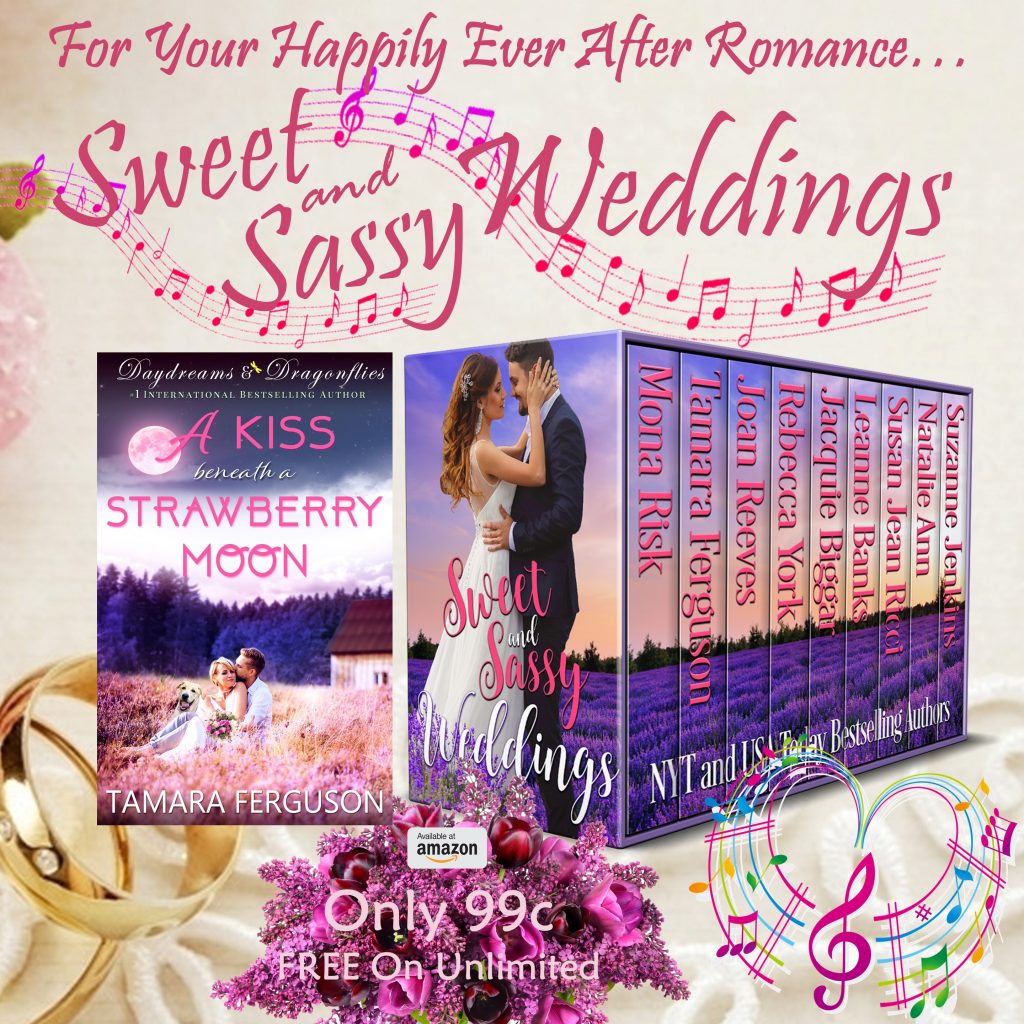 SWEET AND SASSY WEDDINGS – Happily Ever After Romance

With this ring I thee wed, says the groom, and the bride smiles, always beautiful, always dreaming of a happy future. Whether she is young or not that young, a hopeless romantic or an Ice Queen, a vocalist or an attorney, a mail-order bride or a poker-bet fiancée, a single mom or a stay home mother and widow, our bride dreams of love and passion, and a walk down the aisle.
Celebrate true love and commitment with SWEET and SASSY WEDDINGS, nine breathtaking stories from New York Times and USA Today bestselling authors, all award-winning authors.

The dreams of every young woman in love lead to this one day of her life, the day she truly becomes a princess, that special day she will remember for the rest of her life: her wedding day.
EIGHT New York Times and USA Today bestselling authors bring you eight stories of memorable weddings, spilling over with nervous tingles and overwhelming moments. Experience the euphoria of wedding day bliss, cry a river of happiness and celebrate the joy over and over again with these happy ever after tales. 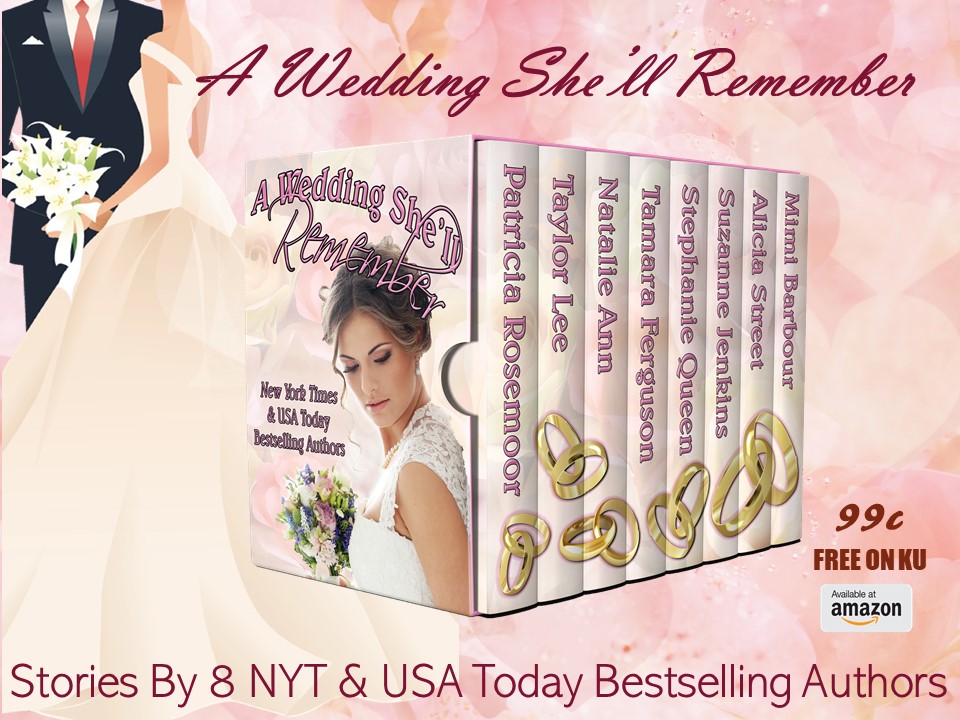 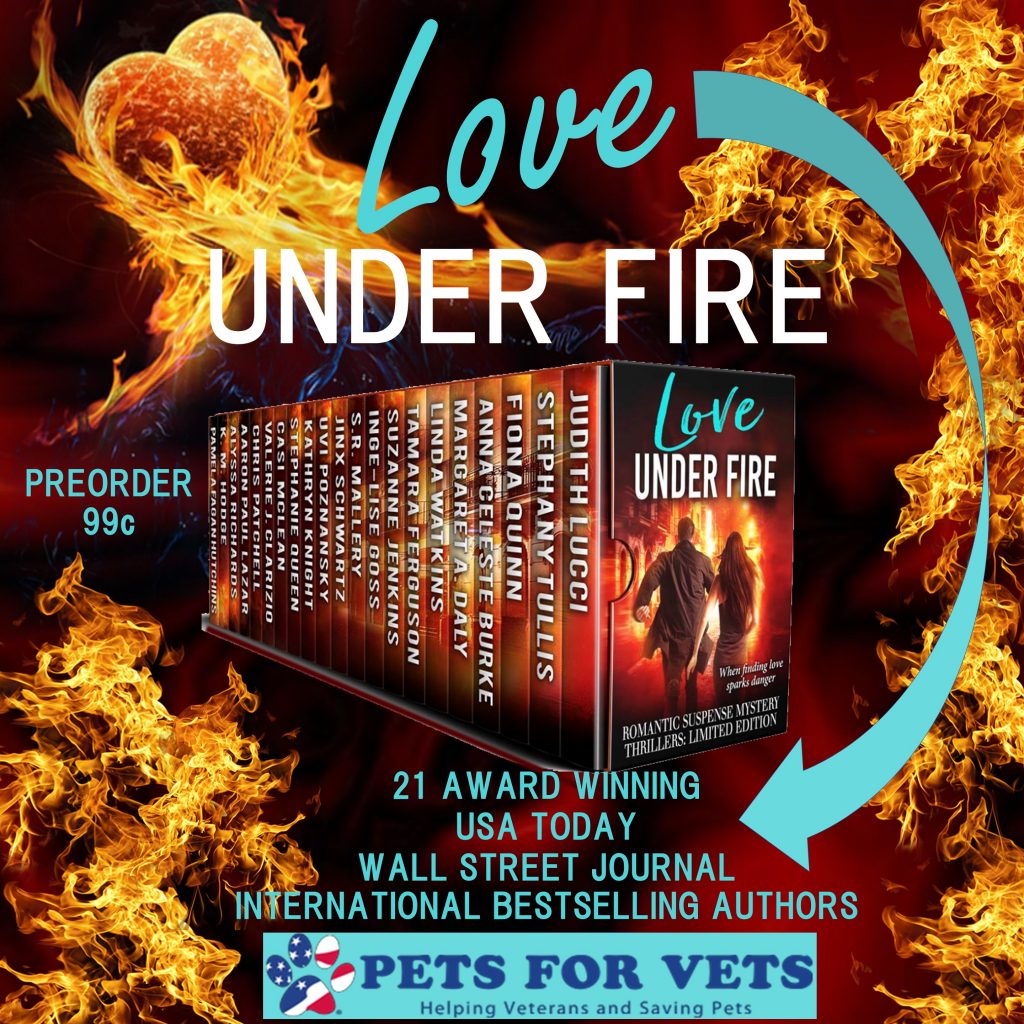 On the road to love lurks mystery, betrayal, greed, and death.

With every turn of the page, romance smolders and fiery suspense lights up the night. Feel love and pain as you fight alongside the tenacious heroes and heroines as they battle for their love and survival. They’ll put everything on the line to thwart the danger coming after them.

They want to trust in the power of love. But is it enough?

Come join us to see the official cover for Love Under Fire, enter to win our first giveaway: Love Under Fire Survival Kit Tote filled with the tools you need to survive … (contents revealed on June 1st)

THEN STICK AROUND TO MEET THE AUTHORS!

Starting June 1st and running until June 21st you will meet the authors from this set! The authors will introduce themselves and interact with you every day! All authors will be having their own giveaways! So that means you have a chance  to win everyday!

Below is the author line up.

M. Hodge will kick off this event on June 1st

Falling for Captain Hunk is here! I’m excited that this novella, a spin-off of my Beachcomber Investig

The set features 18 novellas by award-winning, bestselling and wonderful authors who I can personally recommend. Each story features a hunky hero who rescues his woman from some danger or terrible situation. These are the special stories about being rescued by your dream man, the kind of stories that make your heart wobble and your blood hum.

But you don’t need to take my word for it–you can own the set for only $.99 and try all 18 novellas for yourself. Today you can meet the authors at our HUNKS TO THE RESCUE Facebook Release Party. You’re all invited!

Here’s a SNEAK PEEK of Falling for Captain Hunk:

“Jim, you’re killing me. Literally.” Captain Colin Lynch looked at the bloody, fat-veined roast beef held up for his inspection by the deli man.

Cap, as his friends called him, was on a mission, but it had nothing to do with his usual state police business..

He’d been standing at the deli counter for the past ten minutes, and it was beginning to look nearly impossible to find food that did not contain some deadly additive or excessive fat. He might be the man in charge of keeping mayhem at bay on Martha’s Vineyard but, unfortunately, that was of no use in accomplishing today’s task

“Then you belong at the salad bar with all them—”

Cap was spared the rest of the comment when Jim was interrupted by the sound of cans crashing to the floor followed by a surprised screech.

“Sounds like a problem in the canned vegetable aisle,” Jim said.

Cap would have responded with a wisecrack about the unhealthy nature of canned foods, but when he turned, what he saw stopped him.

A woman, a vision really, with long dark hair wearing jeans that curved tight around every sculptured turn of her long legs, brushed past him in a hurry. She might have been ballerina graceful, but she was strong enough to knock him back a step. Cap had no chance to react except with a jump in his pulse. She was past him and disappearing before he had a chance to stop her.

Then she turned to look back at him. The startling blue eyes that met his snapped with electricity. The zap shot through him and he could have sworn his heart actually stopped a beat. The connection lasted for only a fraction of a second.

Then it was gone as she moved away like a fawn on the run.

As his heart settled down, Cap exchanged a quick glance with Jim to see that the grizzled old marine-turned-deli man agreed with hiss assessment. The lithe beauty ran as if she were escaping from someone. This could be trouble.

And uniform or not, on duty or not, Cap was the man in charge of trouble. He tamped down the hum of alertness caused by adrenaline while he took off in the direction where he’d heard the crash. A man was halfway down the aisle and heading his way.

He recognized Kaspian Ellison, aka Kasper the Ghost, from the morning’s bulletin from the governor’s office. His old special-ops-commander-turned-governor, Peter John Douglas, sent him the man’s picture with a warning. And a request. Technically, it was an order since Peter, as the governor of Massachusetts, was his boss.

The request had been to watch Ellison as a person of interest in a murder. The file would follow.

Kasper the Ghost marched forward like he was on a mission. As if he were trying to catch up with a disappearing beauty.

Cap hoped to hell this head of a heroin trafficking empire with a penchant for violence had nothing to do with the memorable woman he’d seen. Going on instinct, Cap decided to put himself in Ellison’s path at the end of the aisle.

Hunks to the Rescue is available at: