More times than not, life isn’t tied up in a nice, pretty bow and we are left to figure out how to deal with friends or family members whose character traits are, well, less than perfect. But none of us are perfect, are we? We’re all just humans… being. (Many of my books touch on this fact.) The best we can do is learn to live and let live, learn to love those who are unlovable, and most of all, we must find it in our hearts to forgive. I’m so proud that RECLAIM MY HEART has done well (it made the USA TODAY Bestsellers List!), and I thank all of you who have read, enjoyed, and taken the time to review the book. Some of my favorite review clips:

“This book really hit home for me… I enjoyed the characters as I could relate to each of them. I love the story and I have to say that I wish there was a continuing story. I would love to know how everyone is doing since the reunion… Thank you for a good, heart-warming story.”

“Excellent … Hard to put down. Looking forward to reading more from this writer. Truly a memorable reading experience.”

“The best book I’ve read in a long time.”

“…the characters came alive. …addressed so many issues and left you with so much meaning, pride and joy.”

Available at regular price in Paperback and Audiobook.

Well, here I am again, attempting to answer another question about favorites—which I really don’t have an answer for. The reason this is difficult for me is because it’s not specific characters who stand out for me as much as it is their traits, personalities and sense of humor, which is why I enjoy specific authors.

I guess sometime during the past ten years, I’ve switched my mindset over to writer, even when I am reading a story for enjoyment. These days, I don’t have much opportunity to read, but in the past, I would read an entire novel a day, and sometimes more.

END_OF_DOCUMENT_TOKEN_TO_BE_REPLACED 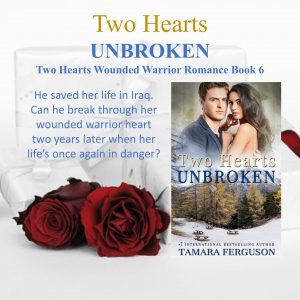 I’m Tamara Ferguson, and I’m new to the Authors’ Billboard this year.

But after admitting that, I have to laugh because I probably have close to fifty published interviews online, mostly because I have a problem with saying no.

So, what I am I willing to reveal about myself?

I’ve led a way too colorful life, with a lot of ups and downs. From the time I was a kid, I’ve had a bunch of different hobbies and worked several kinds of jobs–lifeguard, swimming teacher, secretary, solar energy researcher and teaching assistant, waitress, sales rep, floral designer and a wholesale florist and horticulturist to name a few. And I almost taught college level horticulture—it broke my heart to have to say no because I was pregnant and unable to relocate to Chicago with my husband at the time. Teaching was what I always wanted to do.

So how does my experience aid my writing?

It makes it easy to expand on secondary themes and characters when there’s a little of me in each of them. Plus, I’m a firm believer in happily-ever-after endings. I take a lot of the negative twists and turns that’ve occurred in my own life and spin them around to create a more positive outcome. For me, my writing is all about hope.

What’s an example of that?

I’m the mom and full-time caregiver of a severely autistic son with diabetes. I use my experience and circumstances to develop my character Beth In Two Hearts Unspoken. Like me, Beth is struggling with the quality of care and monetary cutbacks in the state of Illinois while trying to raise her severely autistic son Kyle.

Beth is a single mom, which I once was. But unlike me, Beth decides to follow her dream and ends up in a town she vacationed in as a kid, since a new vocational facility for the mentally and physically disabled has recently been built, and Kyle has been accepted into their program.

I mix elements of romance, suspense and humor into my stories in an effort to make my characters more relatable and realistic. Sometimes the reader doesn’t catch the serious undertones that I weave into each story because I write simplistically with humor. I try to view problems through the perspective of the characters I create.

Humor is what gets me through my own life. No matter how overwhelming my problems are, I always try to find a bright side to everything. But wow sometimes this can be really difficult! After something totally devastating occurs, life goes on.

And sometimes you have to decide whether you want life to go on with or without you.

Tamara Ferguson’s contemporary military romance novella, Two Hearts Unspoken, is a moving and beautifully written story about a romance between a wounded veteran and the mother of an autistic son, who have both moved to Crystal Rock for healing and a fresh start. I enjoyed seeing how the two of them felt that instant attraction despite the misgivings and insecurities each of them had, and loved seeing how their relationship grew. While this story is categorized as a romance, it deals with two important and serious issues, namely the rehabilitation of veterans who bear both physical and mental scars from their tours of duty, and the lack of sufficient vocational opportunities for young people with autism, who all too often are shunted away into institutions instead of being surrounded by family—5★—Jack Magnus for Readers’ Favorite

Two Hearts Unspoken is on sale for 99c for a limited time. 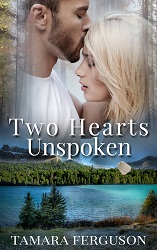 During the last 2 years she’s become a 4X Readers’ Favorite Book Award Winner for short story fiction, romance suspense, earning the silver medal for military fiction, a 2X winner for the Romance Reviews Readers’ Choice Award for new adult and anthology romance, a 3X finalist for the IAN Book of the Year, and a New Apple Romance Selection for excellence in publishing.

Since she’s the full-time caregiver of a severely autistic son, you can usually find Tammy working at home where she spends a lot of time not completing her numerous home improvement projects because she’s writing or helping other authors promote their books on twitter.

Thanks for stopping by today!

We hope you enjoyed what we shared with you today! Please take a few moments to share with your friends using the share buttons below. Subscribe to our blog so that you don’t miss a single post. —>>

And be sure to subscribe to our newsletter, get some free books and then get a note containing sales and new releases each Friday.