Like most kids, farm kids get their driver’s licenses at age 16. But we were allowed to drive in the fields as soon as we could, and to drive the country roads to and from the granaries during harvest time, when we were 14 or 15. My experiences were common. 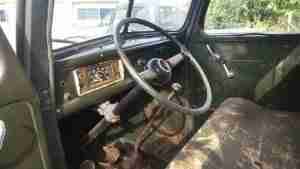 I remember vividly my grandfather teaching me how to drive. I think I was 13, but can’t remember. He put me in an old truck that had no doors, put enough of a pillow behind me that I could reach the pedals, and proceeded to teach me how to start it. The starter was a separate foot pedal you had to push.

The procedure went something like this: Right foot on the brake and left foot on the clutch. You let the clutch out far enough that it would keep the truck from rolling (on a hill). Then you moved your right foot over to push the starter pedal, turning the foot sideways enough to push on the gas as soon as the engine started, at the same time pulling out the choke, adjusting the little knob in or out as needed. Here is a short video showing someone starting one of these. Video of starting an old truck.
Notice the play in the steering wheel. You had to turn the wheel completely around to turn a corner, then spin it hand over hand to straighten it out.

I remember how scared I was that I was going to mess up. As soon as I knew how to start it, Grandpa had me drive up a steep hill. Halfway up, he had me stop and turn off the engine, then start again, using the clutch to keep from rolling backward. We did this several times. I was warned not to drive around the hills, or I would roll my truck over. I must always remember to drive straight up or down, especially when I had a load of grain. The combine could go around the hills since it had a leveler on it to keep it upright.

The clods in the fields made the truck bounce up and down, so my feet kept bouncing off the pedals. Going uphill was very hard, as I had to use the steering wheel to pull myself forward enough to reach the pedals. I must have looked funny to the men, with my jerky progress, especially uphill.

I think I drove one or two years in the fields only, before being able to drive to the granary. One year everyone had a bumper crop, well over 100 bushels per acre, so that the combine barely moved, trying to collect all the grain. Before I could unload, our entire line of trucks was sent to another granary. I was 16, so could drive on regular roads at the time. After waiting at the second granary for over an hour, the truck ahead of me and the rest of our line was sent into Oregon to a third granary there. It took me most of the day to unload one truck. They were piling it outside the granaries and loading it directly onto train cars and barges, to stay ahead of the harvest. Everyone was exhausted after that harvest.

I used a description of an old truck my grandfather used for logging, when I wrote “The Stubbornest Girl in the Valley.” That one even pre-dated the one he used to teach me to drive.

One other piece of farm equipment I drove was the D-8 caterpillar tractor, which replaced the four horses and thirty-six mules that dad used to use to pull the combine. My uncle had me drive it to pull the hay wagon. It had two levers and two brake pedals. To turn you used the lever and brake on the side you wanted to turn towards. For a gentle turn, the lever was enough. To turn sharply, you braked, which stopped the track on that side, and pulled the lever back, making the other track spin around the first. Like truck driving, I was scared when I first had to do it, but my uncle would jump on the back of the tractor and talk me through it. He always started it up and rode with me when we took the wagon back to the barn, so I only had to navigate around the bales of hay and remember not to run into the fences.

I found out later that the lever-brake combination is used for airplanes, which explains why they made so many farm kids into pilots during World War 2. I went up for a touch and go flight with an instructor when I lived in Hawaii, and he thought I had flown before. I said, “No. I’ve driven a caterpillar tractor.” The turns had the exact same feel.

On our hilly farm, I was never put on the wheel tractor, as it turned over too easily. I did have to ride the trip rake behind my dad, who pulled it with that tractor. A trip rake is described in “Little Britches,” by Ralph Moody. He broke all except one of the toes on his feet while on it, but his was pulled by horses that ran away with him. 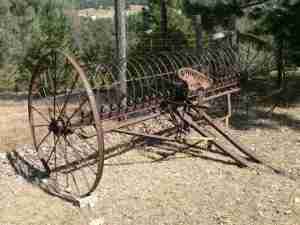 The rake drags across the ground, scooping up the hay. When the circular tines are full, the person (me) riding the rake pushes the foot lever. The rake flips the tines into the air just long enough to release the hay, and then they come down with a force that almost throws the rider off the metal seat. The seat is up all by itself, above the rake, with nothing to hang onto except the seat rim where you are sitting, and you have to keep your feet away from the foot pedal once you trip it. It is like riding a bucking horse.

Ever so often you’ll see one of these rakes still around. I know now that if I ever was thrown off, I would have probably landed in the hay row, behind the rake, and not under the tines, but Dad watched me carefully. I don’t know how old I was when he started me on the rake, but it was several years before I learned to drive. 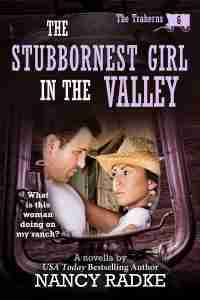 I have been endlessly fascinated if somewhat afraid of the supernatural. No matter the fear, I continued to be drawn to the supernatural in movies and books, and the first chance I had, I started writing paranormal and urban fantasy romances. WRITTEN IN THE STARS, co-authored with Sherrill Bodine, gave me a chance to explore the idea of reincarnation, something I love, love.

I truly believe justice should be served, but as we know, that doesn’t always happen. Some people live a good life and don’t get what they deserve. Same with people who live a bad life. So I love the Hindu concept of reincarnation and karma. Basically, we reap what we sow. The reincarnated villain finally must pay for the evil he did in the past.

More importantly, Elizabeth and Will must be reunited again in new lives. Cordelia Ward follows their journey through the journal of her ancestress Elizabeth. To start, Cordelia is  the part of me that is a skeptic. But slowly, through the journal and precognative dreams, she begins to realize she might have a deeper connection than she ever suspected…

Excerpt from Written in the Stars:

The part of me which never dies will find Will at last. Know that if I combed the earth and searched through the galaxies for eternity there is no being I would want but this one. And so it shall be when once again passion beats between us like a living force.
I long for this with every breath I draw. Yet I have foreseen that once again Carlyle’s evil shall rip us asunder. Do not be so bewitched by enchantment that you believe all danger is past. For you and I are one.

Feeling as if she’d just seen The Celestine sink through Elizabeth’s eyes—a supernatural feat on her ancestress’s part that took away her breath—Cordelia set down the journal in the middle of her bunk. Her own abilities of having precognitive dreams and a brush with telekinesis were dwarfed by comparison.

Elizabeth had written: That future is for you to write for it is set firm in your stars. And: For you and I are one.

Had Elizabeth meant her specifically? Cordelia wondered. Was she the you in the journal? Was she meant to fulfill Elizabeth’s destiny and find her Will?
Or was it the Will, as in Will reincarnated? Was she Elizabeth reborn?

All along, the journal had drawn her closer and closer to the past. The dreams had taken her to another level, had shown her what she now believed to be true.
At first she’d been afraid to believe. Never having known that kind of love, she hadn’t been open to it. But that last dream had convinced her, had seduced her in new ways. She wanted its promise. Needed it. And only one man could give it to her. Which man? she wondered, hoping it would be the one who had her heart.

Open your mind and you will know what is true…

Had she really heard a woman’s voice? “Elizabeth?”

Written in the Stars is at a special price of 99 cents through October 28.