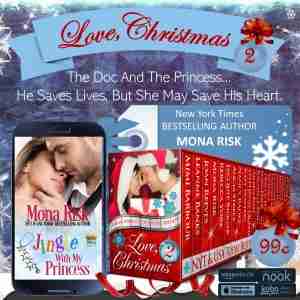 “Have you lost your mind, Amy? Calling your former boyfriend to Rensy Island,” Prince Paul bellowed, his menacing scowl reflecting the gloom of the day.
“Chill out, Paul.” Amy shrugged and picked up a yellow bear from the carpeted floor of the Yellow Lounge Room. “I don’t care that he’s a former boyfriend. I’m seeking Scott’s help for our son.”
Paul followed her to stand next to the portable crib where their toddler lay, playing with his blue blanket. “I’m sure we can find a better doctor in England.”
“Dr. Pratt is an expert in neurosurgery. People come to him from everywhere. He’s the best doctor to perform such a difficult surgery on Eric.” How could she make her husband understand that his outburst didn’t make sense? “For heaven’s sake, Paul, I dumped Scott for you five years ago. Now two malignant tumors threaten our baby’s 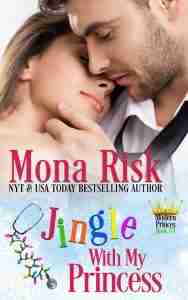 brain. Would you sacrifice him because of your blind jealousy?”

My readers met the protagonists of JINGLE WITH MY PRiNCESS in the first book of Modern Princes Series, A Bride for Prince Paul. Dr. Scott Pratt is the hero of the p

Should he go?
He’d never refused to treat a patient, never rejected a desperate mother’s plea.
Would he be able to greet Amy without pulling her into his arms to ply her with kisses? Or more likely to shake her in anger?
Would he be able to face her husband without punching him for stealing his girlfriend?

JINGLE WITH MY PRINCESS: The doc and the princess… He saves lives. Can she save his heart?

In the summer of 2016, my husband and I took a fifteen-day cruise around the British Isles. Our first stop was in St. Peter Port, the capital of Guernsey Island, the largest of the Channels islands, located west of Normandy, France.

The guide explained that the residents of Guernsey speak English and French, don’t pay taxes (or pay very low taxes) and enjoy free medical care for children under seven and seniors over seventy. The island originally belonged to the Duke of Normandy and then alternatively to England and France. Now it is part of the British Commonwealth. The ruler is a governor and the constitution states that in case of problems the island would revert to England.

I loved the setting. My muse immediately replaced the governor with a prince, just like the rulers of Monaco or Luxemburg, both in Europe, and my imagination changed their constitution–the heir to the throne must be married. Guernsey Island became Rensy Island, the setting of the Modern Princes Series. 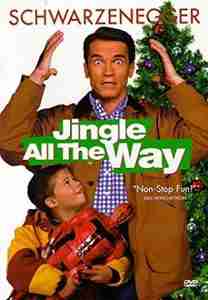 In the Movie Jingle All The Way, Arnold Schwarzenegger plays a detached parent trying to win back his son’s heart by getting him the perfect toy…which is sold-out throughout the city. When the son finally receives the toy, he gives it to the son of his father’s rival. All what he wants for himself is what he’s just gotten back—his father.

The movie makes fun of the consumerism of the holiday season and shows how ridiculous and crazy people can be when they get too obsessed with getting stuff for Christmas. It demonstrates how important it is to actually keep love and generosity ahead of material things and nasty feelings… As Dr. Scott  Pratt, my hero, will do with the help of Princess Charlene—the sister of Scott’s former rival, Prince Paul.

Did you know we are running a giveaway? Are you interested in winning a gift card or a free book? Click here to find out more details on this month’s contest