Currently I am writing two new wedding stories which will be published in Authors’ Billboard boxed sets, so rather than expanding on that, I thought I’d share my review for my friend Mimi Barbour’s latest series (which of course would be a great gift for MOM!!)

Happy Reading and for those of you who are moms, Happy Mother’s Day!! 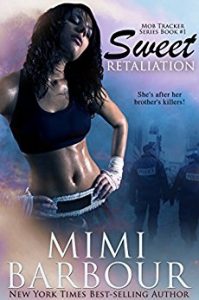 Sweet Retaliation is Book #1 in the fabulous

My Review Of Sweet Retaliation:

A Gripping Series About A Sister’s Quest For Justice

When Cassidy’s twin brother is shot and killed by a gang member, she’s devastated, and becomes obsessed to identify the murderer and seek justice.

But to do this, she needs to be stronger, transforming from the good girl next door into a fearless fighter who puts herself in danger time and time again. Trace McGuire is the detective who’s assigned to solve her brother’s murder. Although the last thing he wants are complications in his life, he finds himself drawn to Cassie, but deeply concerned when she continuously risks her life to seek the truth.

Sparks fly when they decide to work together, and Trace finds himself wanting to protect Cass while falling for her hard. But they each have trust issues, and there are times when they withhold information from each other.

This book has been a revelation to me. In fact, the whole series has worked its spell.  It’s been bursts of magic mixed in with a hell of a lot of hard work.

Every once in a while, an author begins a new story, and as soon as it starts, the character takes over. This happened to me. I could picture this girl in my mind, a librarian whose personality had to be that of a shy, scared, insecure miss who did nothing when she watches some mob members kill her twin.

After that incident, she needs to change into a person who feels such revulsion for her behavior that nothing matters except that she seeks revenge for the death of her brother. How can she live with herself if she doesn’t?

“Keep down.” Rough, his hands hurting, he pushed her head under his chest while she wiggled to get back to Raoul. “Stop it. You’ll get us both killed.” His voice, hard and angry drew her attention. She shook away from his hand and looked at him, trying to explain that the injured man was her brother and he needed help. When their eyes met, the bit of light from the building’s illumination revealed his face.

For the outstanding Mob Tracker series!

Cassidy is bereft when her twin brother is shot and killed by a gang member. She vows to find the murderer and wreak justice. So she remakes herself from the quiet librarian she is into a hip gangsta chick. She’s something else as well — an elite boxer and this gets her out of tough spots time and time again. Detective Trace McGuire is assigned to solve her brother’s murder and, in short order, he’s completely smitten by Cass. But he’s terribly protective and, while he is in awe of her fighting ability, he can’t help but be beside himself with worry as she throws herself into the line of fire time after time.

Ms. Barbour has written a gripping story about one woman’s quest for justice. She has deftly created marvelous characters that pull you into their story. This is a suspense-filled, full-bore non-stop action ride that you will absolutely love.
~~~~~~~~~~~~~~~~
I just finished Sweet Retaliation by Mimi Barbour (Book 1 in The Mob Tracker Series).
Sweet retaliation is a book that you do not want to miss!
Cassidy witnesses something that no one should ever have to witness.
Her brother’s murder.
I loved Cassidy from the very beginning. She has it all – sweetness, kindness, sass and class.
Her character is written beautifully, she has such depth in her character.
We see her whole range of emotions and how she deals with them and we also see her transform from what you think is a sheltered, naive woman to a woman that is a force of nature!
Trace McGuire is a man who has seen it all and you feel fairly certain that nothing could ever surprise him as a cop. But he hadn’t met anyone like Cass.
He is completely unprepared for the woman that is as stubborn as he is.
I loved their chemistry and how their characters fit together.
I also giggled multiple times at their banter and especially at his reactions to Cass’s witty comebacks or remarks.
I am in love with this book and I’ll be following the series for more!
~~~~~~~~~~~~

Absolutely brilliant read!
From the very first page I was hooked in to this story. The action begins straight away for Cass and doesn’t really stop throughout. This is the first book that I have read by this author and I was really impressed with her writing style. She created characters that I connected with straight away and a plot that flowed seamlessly. This book really was a joy to read! I love mob/crime/mystery stories so I knew this one would be right up my street and it was! There were some fabulous twists and turns and my attention never wavered once! A brilliant introduction to a new author.
Cass was a fantastic character! After the first chapter I wasn’t suite sure whether she would do what she intended to do but as the story went on she showed her strength and was determined to bring her brothers killer to justice. I loved the connection between her and Trace! There was just something about them that I loved. She is probably one of the best female leads that I have read about in a while.
Trace – oh Trace how I love you! As soon as he appeared in the story I knew I would fall in love with him and I did! He was a really great character, independent, focused and not afraid to push the limits when needed. Together he and Cass were amazing!
I really cannot wait to read more from this author in the future and highly recommend this story! You will have a hard time putting it down once you have started!
Mimi Barbour did an awesome job!