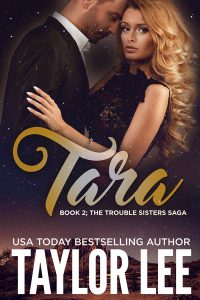 She’s a brash newspaper editor and declared environmental activist. He’s an arrogant land developer. A broken elevator forces them to confront each other not as diehard adversaries but as a man and a woman.

Tara, the oldest of the Trouble sisters, is as outspoken as she is beautiful. Proud to be known by her critics as a rabble rouser, Tara even goes so far as to equate Griffin Blacks’ proposed development with rape of her pristine county.

An up from the bootstraps developer, Griffin Black is proud of his innovative developments. Earning kudos from Native American leaders to corporate and government leaders, Black doesn’t suffer fools or critics gladly. Especially a gorgeous women he’s more interested in courting than confronting.

When the sparks inevitably fly, Tara discovers that the man she is falling for is as complicated as he is compelling. When Griffin is the prime suspect in a vicious murder, the two passionate lovers acknowledge that even as powerful as they are, they may not survive this crisis.

Tara, the second book in The Trouble Sisters steamy romantic suspense series is for discriminating readers who insist on great characters and a spellbinding story that also includes HOT romance. If you like smart, complicated characters, and scorching passion, then you’ll love Taylor Lee’s sizzling thrill-ride.

Buy Tara today and prepare to be wowed!