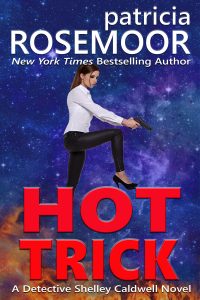 Being a Chicago homicide detective, Detective Shelley Caldwell finds her life complicated by her city’s supernatural underground, her abilities as a sensitive and her half-vampire lover, Jake DeAtley. She’s approached by a man who claims he’s a banshee, who has visions of someone drowning in a trunk. Shelley shakes the warning away until illusionist Sebastian Cole claims he will escape from a locked trunk submerged in the river. He pulls it off, but a woman across town drowns in another kind of trunk.

Then another banshee warning and a second death with circumstances eerily similar to another of Sebastian’s tricks makes Shelley even more determined to identify and stop the killer. There must be a link between the magician and the murders. Otherwise, why is Sebastian invading her sleep and stirring her senses? Jake’s negative reaction to the illusionist makes her even more wary. Can Shelley fight off Sebastian’s supernatural influence to determine if he’s the killer…or will she become another victim?