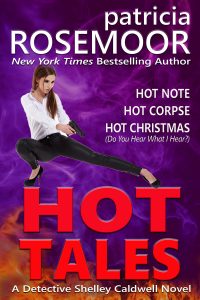 HOT NOTE
Homicide detective Shelley Caldwell and her half-vampire lover Jake figure out three murders deemed suicides are connected. But Shelley can’t suggest that powerful paranormal forces are at work to her department—one psych evaluation was enough, thank you very much. So she and Jake investigate, putting him at risk and leaving her with the task of figuring out how to beat the odds when fighting a supernatural force.
HOT CORPSE
Detective Shelley Caldwell gets all the woo-woo cases. When bodies are found–rather skeletons of bodies–she knows the supernatural is involved. Not wanting another psych evaluation, she keeps that aspect hidden as she tracks down the killer in this short story.
HOT CHRISTMAS
(novella originally published as Do You Hear What I Hear?)
The song “Do You Hear What I Hear?” was written as a plea for peace during the Cuban Missile Crisis in the middle of the Cold War with Russia. Now Christmas is around the corner and live-in lovers Detective Shelley Caldwell and Jake DeAtley are in a cold war of their own. Shelley has all wonderful memories of Christmas, while Jake, born of a mother turned vampire while pregnant with him, has none. They’ve come to a compromise that she can decorate “her half” of every room, but there can be no Christmas tree. Then a case of hit-and-run leaves a dead body and a magical Christmas tree. With her woo-woo instincts ablaze, Shelley can’t resist bringing home the tree, heating up the war with Jake. There is more to the tree than either knows. Will it bring them back together or push them farther apart?