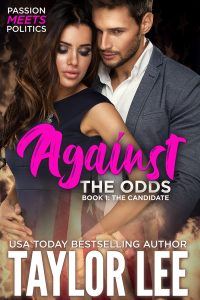 Gia is a hotshot campaign manager. She should be. Her father ruled the county for years…until he went to prison. Determined to back a worthy candidate, Gia chooses to run a newbie who happens to be her fiancé.
Logan is a high-tech phenomenon. In addition to being more than a little arrogant, he is beyond wealthy. Desperate for campaign cash, Gia is determined to convince him to support her candidate. She insists she doesn’t want him, she just wants his money. That assertion lasts until she meets him.
Not surprisingly the sparks fly between Gia and the sexy entrepreneur, until he refuses to fund her candidate. Infuriated by his rejection, she kicks him to the curb. When her fiancé/candidate commits an unspeakable crime, Gia admits that the wealthy tech magnet was a better judge of character than she was.
That doesn’t mean that she will accept his outrageous proposal as to who should run for office to replace her disgraced candidate.