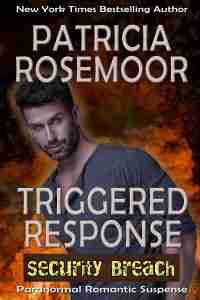 His brain was on fire, and he fought going back to the raging inferno of his private hell. Despite the power he now possessed, he couldn’t even remember his name. According to the news, he was Brayden Sloane, former security expert at Cranesbrook Labs, now wanted for murder and kidnapping. He couldn’t remember that, nor the woman who claimed to be his wife. Claire Fanshaw needed Bray to find her friend who’d disappeared following the explosion. Until Bray regained his memory, she’d stick to him like glue. But what would he do when he realized the woman in his bed was a stranger? And what would she do if the cops were right about Bray?

Excerpt:
Standing in front of Lab 7’s door, Claire felt her stomach tighten and churn. The door was soot-stained, looking worse for the wear, but it was closed. Probably locked. She reached out, took a big breath, then tested the handle, expecting she would have to use the key. She didn’t. That it turned made her more nervous. Was someone already inside? Ulrich?
Her fingers tightened around the folder. She pasted a smile to her lips—just in case she had to use her cover story—and opened the door.
The lab was dark.
Shoulders sagging with relief, Claire stepped inside and pulled the door closed behind her. No doubt the lab was open because Project Cypress had just been moved and someone figured you didn’t need to lock an empty lab.A little light came in through the windows that faced the center of the Cranesbrook campus with its lake surrounded by rocks and natural grasses. No one ever went out there—not that she had ever seen—but anyone in the wing across the way could see into the lab, as well, a reason not to turn on the room lights until she’d closed the blinds. Circling a lab table, she crossed the room and did so.
That accomplished, she pulled a Maglite from her pocket, but before she could click it on and sweep the narrow beam through the darkened room, something flitted at the edge of her vision. Her stomach knotted and the breath caught in her throat. What the hell was that? Her pulse thrummed. She stood perfectly still and listened hard for any sound.
Nothing.
Not even the intake of breath.
And yet she knew she wasn’t alone.
What should she do? Switch on the Maglite? Face down the other person? An intruder like herself? Who else would be in the abandoned lab in the dark?
Sensing she’d put herself in danger, Claire decided that the smart thing would be to book out of here as fast as her feet would carry her.
But no sooner did she take a single step than a big body bumped up against her back and a hand covered her mouth. She jammed her elbow backward and got a single “Oof!” in response, but the grip didn’t loosen. Though she tried to twist and turn, she couldn’t free herself. The folder went flying as she stomped backward but missed her attacker’s foot.
He was so damned strong. What was she going to do?
The only thing she could think of.
She let herself go limp, hoping the surprise of her dead weight would make him let go.
Instead he went down with her, crashing to the lab floor. Though she writhed in his arms, the only thing she accomplished was to free one arm and twist around so she was facing him as he landed on top of her.
Shrieking in frustration, Claire snapped on the Maglite and shone it in his battered, beard-shadowed face.
Her eyes widened and she gasped, “Brayden Sloane, get the hell off me!”