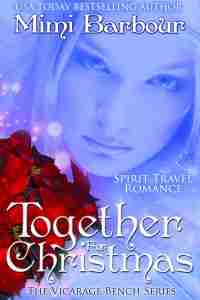 Abbie Taylor has a thousand things to do before the big day, help the vicar with his needy families, organize the Christmas nativity, and spare time for a distraught baby at the orphanage who only settles when she’s near. Falling into a coma while her spirit resides inside a prickly, big-shot businessman doesn’t work for her at all… until she falls in love.

How could Marcus Chapman be so unlucky? First, he’s saddled with his newly widowed mum, and the next thing he knows, he has an annoying spirit invader who’s instantly aware that he isn’t nearly as tough as he makes out. Between these two manipulating women, and the orphans Abbie forces him to visit, the poor man doesn’t stand a chance. The season is Christmas, and love is all around.

99 cents for January or free from Kindle Unlimited

Available from AmazonUS and other Amazon locations