Welcome aboard. Today we are sailing to Corfou, next we will stop in Santorini, and then continue to Rhodes, an island close to Turkey, before turning north to Mykonos and Delos. Have a drink at the bar, relax in a lounge chair, listen to the music, and enjoy our cruise to the Greek Islands.

Corfu is one of the most beautiful and romantic islands of the Ionian island group. From lush green hills to noble mansions and from idyllic Corfu beaches, to interesting museums, this island has everything it takes to please any type of traveler.

Strongly influenced by the Venetians, the French and the English, Corfu Town is a brilliant base for exploration. The top places to visit in Corfu are Achillion Palace, the former retreat of princess Sissi of Austria, Mon Repos palace, where Prince Phillip, the late husband of Queen Elizabeth II, was born.

Don’t forget to stop by a Fish Spa as I did. Hundreds of well trained small fish will nibble on your feet. At first it hurts, then it tickles, and then you really relax and enjoy the exceptional massage.

Today Santorini is a rock shaped like a fishhook, a cone formed by a volcano that erupted before 1600 BC. The current name of the island comes from its patroness, Saint Irene of Thessalonika, who died in 304. The Venetians called her, Sant’Irini and the name stuck. Sant-irini became Santorini.
The highest point of the island is marked by the monastery of the Prophet Elijah. On the eastern shore of the island there are beaches of black sand from previous volcanic activity.
In addition to a temple dedicated to Apollo, there is a shrine cut out of rocks to honor the Egyptian gods Isis, Serapis and Anubis, a reminder of the Egyptian presence during the Ptolemaic period.
The present capital of Santorini is the town of Thera built on top of the cliff. Excavations began in 1967 and scientists wondered if Thera was not part of the lost continent of Atlantis described in Greek literature. Views from this picturesque town are especially beautiful. 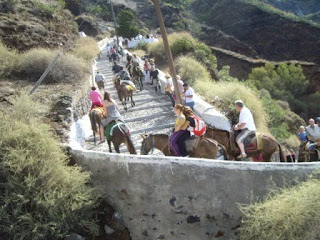 You can reach the top of the island riding on a donkey, or by cables. We used the cable. Since I am terrified of height I held my husband’s hand and closed my eyes, then opened one eye when he insisted the view was terrific and I was missing half of my life by not looking.
Once up on the cliff top, I agreed it was worth the scare. Look at the gorgeous pictures and be the judge. Santorini is an ideal place for honeymooners. I used my time walking and admiring the view, and shopping for souvenirs.

Our next stop was in RHODES: a strong island

According to Homer, the first colonists were Greek. They founded the city of Rhodes at the northern tip of the island and built a powerful citadel to protect it.
In its day of greatest power, Rhodes became famous for its impressive sculptures, like the huge bronze Colossus which stood at the entrance of the harbor. Created to honor, the sun god Helios, it was at least 110 feet high and considered one of the Seven Wonders of the Ancient World. Unfortunately, the Colossus only stood for 56 years before an earthquake toppled it in 224B.C. but the enormous fragments remained half-submerged for another nine centuries. A scrap dealer carried the pieces away on 900 camels.

The most glorious episode in Rhodes history began in 1309 when the Knights of St. John took control after being expelled from the Holy Land following the Crusades. They built St. John’s Chapel and St. Mary’s Church.

You can see here a picture of one of the tunnels that allowed the Knights to secretly escape. They settled in Rhodes and increased the fortifications. The ramparts are impressive, several feet high. A moat circled and protected the city when the drawbridge was raised. After Constantinople was captured by the Turks, repeated sieges of Rhodes by the Turks weakened the city. At the end only 180 Knights remained to defend Rhodes. They were expelled to Malta and Rhodes became Turkish property. The Italian navy seized Rhodes in 1912 and it was turned over to Greece in 1948.

The famous movie of Guns of Navarone was filmed in Rhodes.

Our next stop was in Mykonos, probably the most cosmopolitan of the Aegean Islands. I visited four times in the last twenty years, the first time when my children were teenagers.

We fell in love with the picturesque island and returned the year after. The streets are a maze of narrow, winding alleyways – many only two or four feet wide, overhung with dazzling pink and purple blossoms.

All the houses, shops, churches, restaurants and windmills are immaculately whitewashed, with door frames and window shutters highlighted with splashes of sky blue and jade green.

On every second doorstep sits a cat, gazing down serenely at passers-by.

From HER GREEK TYCOON, here is a description of Mykonos as the heroine Ashley sees it from Stefano’s yacht: “See, we are passing Chora, the capital of Mykonos.”

“Now, keep your hands on the helm and steer to the left.”

The Athena glided through the water and gained speed. Stefano opened the side windshield and let the breeze invade the pilot station. “What’s your pleasure?”
With a toss of her head, Ashley flung her hair back and took a deep breath. “Can we stay close enough to the shore to discover the beaches?”

“Absolutely. This little cruise is all yours.”

Exhilaration filled her heart. She steered a superb ship and the captain was determined to please her. “Thank you, Stefano. I really appreciate you taking the time to show me your beautiful island.”

“We’re passing Korfos. Keep straight. The main island is looping into a cape. Now you can see Agios Ioannis—St. Jeanne Beach there. It’s small but picturesque.” He handed her a pair of binoculars and she scanned the beach.

Blood rushed to her cheeks at the sight of the topless bathers lying on towels or relaxing on lounge chairs. A couple hours ago, she’d been soaking up the sun on a similar chair—in a similar pose.

Lowering the binoculars, she glanced at him. His face expressionless, he stared at the horizon and hadn’t noticed her embarrassment. “We are crossing a strait between Mykonos and the ancient island of Delos. I’ll handle the helm while you enjoy the view. The rocky islet offers an impressive exhibit of columns, temple remains, and statues of lions.” Ashley shifted to the other side of the pilot station and adjusted the binoculars to her eyes while Stefano took back the control of his boat.

“Delos is the birthplace of Apollo. His mother, the nymph Leto, was seduced by the god of gods, Zeus,” Stefano explained while Ashley admired the sculptural ruins of sanctuaries. “When his wife, the goddess Hera, learned of his treachery she banished the pregnant young nymph from earth.”

“What happened to Leto?” she asked, genuinely interested in the sad love story. Had all the Greek maids been destined to suffer because of love? She had Greek blood in her veins and wanted to hear of a happy ending.

“Poseidon, Zeus’s brother, rescued the nymph and had her deliver her baby on the island of Delos which wasn’t considered as part of the earth.” Stefano told her more about the history of Delos, a necropolis with too many burials for her taste.

New York Times and USA Today Bestselling Author, Mona Risk, received an Outstanding Achiever Award from Affaire de Coeur Magazine. She's a two time winner of Best Contemporary Romance of the Year from Readers Favorite; a winner of Best Romance Novel of the Year from Preditors & Editors Readers Poll; and an EPIC Award finalist. Mona Risk's name has often been posted on the Amazon.com 100 Most Popular Authors in Romance list, and her books have garnered: Top Pick, Outstanding Read, Sweetheart of the Week, and Best Book of the Week from various reviewers, and received two mentions in Publisher's Weekly. Mona lives in South Florida and has traveled to more than eighty countries on business or vacation. She writes contemporary romances, medical romance, romantic suspense, and paranormal fantasy. Sprinkled with a good dose of humor, her stories are set in the fascinating places she visited or more simply at home. If you like to travel and love to read, come and enjoy her international romances. Meet the spirited heroines and special heroes who share irresistible chemistry in stories that simmer with emotion.  View website
View all posts by Mona Risk →

One Reply to “A Romantic Cruise: The Greek Islands”