I started feeding stray cats about twenty-five years ago. A big orange cat was hanging out around my house, and one afternoon, I saw him with a squirrel in his mouth. I was horrified and chased him, but he got away with his catch. That incident was a turning point for me. I decided that if I started feeding him, he wouldn’t have to hunt and eat squirrels. (Maybe he did it anyway, but I never saw it again.)

I probably fed him for fifteen years on my porch until he stopped showing up in the middle of a horribly cold winter. (No, he wouldn’t sleep in the box I put under the sunroom.) During that time several other cats came and went, but he was my regular. I named him Red, telling people, “Better Red than dead.”

My most memorable stray was Nelson who came soon after Red stopped. I started seeing a gray shape streak out from under the boxwood along the walk to eat on the porch. Like all the other strays I’ve met, she started off skittish. But within a few weeks, she grew to trust me. She must have been someone’s pet because she wanted to come into the house. I fell in love with her and invited her in, although I told her Ozzie and Harry, my two Maine Coon mixes, would hate having a new roommate. I was right, but we’ve worked it out.

I’ve asked Nelson many times why she ended up on the street, but she’s never told me her history.

About six months ago, another female started showing up. She’s a small tortie, and she was very hungry, coming around at all hours of the day for food. 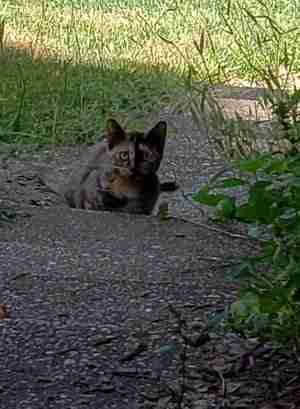 Then one night, I saw her outside on the porch with—I thought—another cat. Only it turned out she had brought three kittens with her to eat. I think they must have been seven or eight weeks old, and I hoped I could make friends with them, but they were already very feral. A neighbor wanted them to go to the pound. I told her that the county would euthanize wild kittens. While I was away at a conference, the neighbor sent me the name and number of an organization that helps with strays.

When I got home, I called, and a very nice volunteer came to my house with a trap. We caught the kittens and the mom, and they stayed here overnight. The next day, they went to the vet to be spayed, neutered, and have an ear clipped, so people can see that they are fixed. Then they came back to my house to recover overnight. In the morning, I released them, and they shot out of their cages as though they’d been shot from a gun.

It turned out the kittens were two girls and a boy. And since they have been neutered and released, I need to keep feeding them. I also researched shelters for stray cats, and put a couple under the sunroom, but Mom prefers the junipers across the open space next to my house or the shelter of my neighbor’s deck and fenced yard. Maybe she’ll change her mind when it gets cold.

I named the mom Hester Prynne (after the protagonist in The Scarlet Letter) and the kittens Hunter (all black), Hannah (a tortie like her mom) and Holly (gray with a white patch at her neck). Sadly Hunter disappeared about five days after we released him. Hester, Hannah and Holly are doing well.

I think Hester is never going to trust me. I’m hoping the two little girls will eventually let me get near them. But I’m not holding my breath.

7 Replies to “My Outdoor Cats”