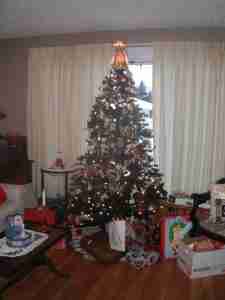 Today is the release day for my newest holiday romance, His Christmas Family, and I thought I would share some of the motivation I had for developing this plot.
The saddest thing about growing old is that everyone else grows older, too. And the time of year when that becomes most evident is at Christmas. My favorite Christmas memories involve those Christmases when the children were at the “I believe in Santa” stage. So much of the magic of the holiday vanishes once they lose that innocence. My youngest grandson is teetering on that edge right now. How I wish I could keep him from growing up too quickly and learning the truth, but school friends make that impossible. And yet, he clings stubbornly to the belief.
The conversation went like this.
“Grandma, a kid in my class said there’s no such thing as Santa. He claims his parents are the ones who buy all his gifts. He said they even told him so.”
“Wow. And what do you think?” I asked, praying he hadn’t lost his faith in the jolly old elf.
He shook his head. “I think it’s sad that those parents are trying to take the credit for what Santa does.”
It was hard not to burst out laughing, but the kid put his own spin on it, so we have a Santa believer for another year. 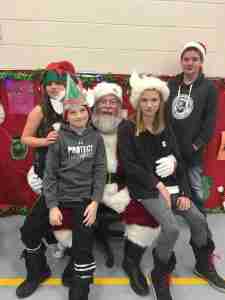 Writing a traditional Christmas romance is always easier when there are children in the story to provide a little comic relief. My daughter has four children. The four children in His Christmas Family, are based on them. The youngest often complains about being last all the time, and that simply had to be part of the story.
Each year, in this city, there is a family who adopts another family as their Christmas family. They do this in memory of a loved one, and it’s helped them cope with their loss. A few years ago, they chose a mother with young children whose husband had died suddenly just before Christmas the previous year. For that woman, if things could go wrong, they did. I decided to use some of what had happened to her for this story. I don’t want to give too much away, but let me say the child needing surgery and the cashed check that should’ve been destroyed really happened. For that family, the generosity of others brought great joy and gave the mother the help she needed to finally get back on track. It’s a lesson she’s taught her children, one we can all learn from.
Life isn’t always kind or fair. This will be a sadder Christmas for us because we lost my father in October, but there are many people who spend Christmas alone. Nothing good can happen unless people choose to look beyond the pain. It is never easy, but if they can find a way to channel that pain positively, then Christmas can be good again for them, too.
I hope you’ll enjoy His Christmas Family.
The Blurb: 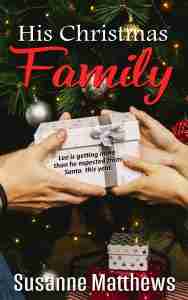 Since losing his wife, children, and parents six years ago to a drunk driver, Lee Ostler stopped celebrating the holidays, especially Christmas. But he isn’t a modern day Scrooge by any means. Because his parents would’ve wanted it, he does his duty by his employees at Ostler Construction, the Payton Falls community, and his sister and her family, but that’s it. When Sonia has to leave the country for a few weeks before Christmas, she begs him to watch the twins for her. Even if it means, parades, pageants, and fairs, how can he refuse?
But things get complicated when the twins accidentally injure one of his employees, who turns out to be the shy girl he admired years ago in high school. Life has dealt Laurie Wilson a lot of blows, but this year, the widowed mother of four has hit rock bottom. How will she give her children a magical Christmas when the cupboard’s bare, her wallet’s empty, she can’t work, and may well lose the roof over their heads? She needs a miracle, and if he happens to be her boss and the former high school quarterback she was too terrified to even speak to back then, how can she say no?
Can Christmas magic bring two broken souls together?
His Christmas Family is available from all Amazon online retailers or free to read on Kindle Unlimited!
http://bookShow.me/B081D4CZ76

8 Replies to “Celebrating the Holidays with His Christmas Family”