I got the idea for The McKenna Legacy series through my own family tree. My maternal grandmother was a McKenna. When I say family tree, I’m not talking one of the new DNA based digital family trees that are advertised everywhere now, though I’ve just started creating one of my own. But more than a dozen years ago, two people in my family in New York decided to take on the project at the very same time. One was Mom’s cousin in the McKenna side of her family, the other was Mom’s brother-in-law, not a McKenna relation but married to one.

Reading about members of my extended family and their relationships with one another inspired me to create a fictional McKenna family with heroes and heroines who reflected some of the qualities of the people I got to know through the two family trees. And being an Irish family, I felt giving the McKennas some form of psychic ability had to be part of their stories.  So The McKenna Legacy was born.

To my darling grandchildren,
I leave you my love and more. Within thirty-three days after your thirty-third birthday – enough time to know what you are about – you will have in your grasp a legacy of which your dreams are made. Dreams are not always tangible things, but more often are born in the heart. Act selflessly in another’s behalf, and my legacy shall be yours.
Your loving grandmother,
Moira McKenna

To celebrate St. Patrick’s Day, I’ve put The McKenna Trilogy–the first 3 books in the series–on sale for $2.99 (regularly $6.49). So if you want to get your Irish on this weekend, meet the McKennas… 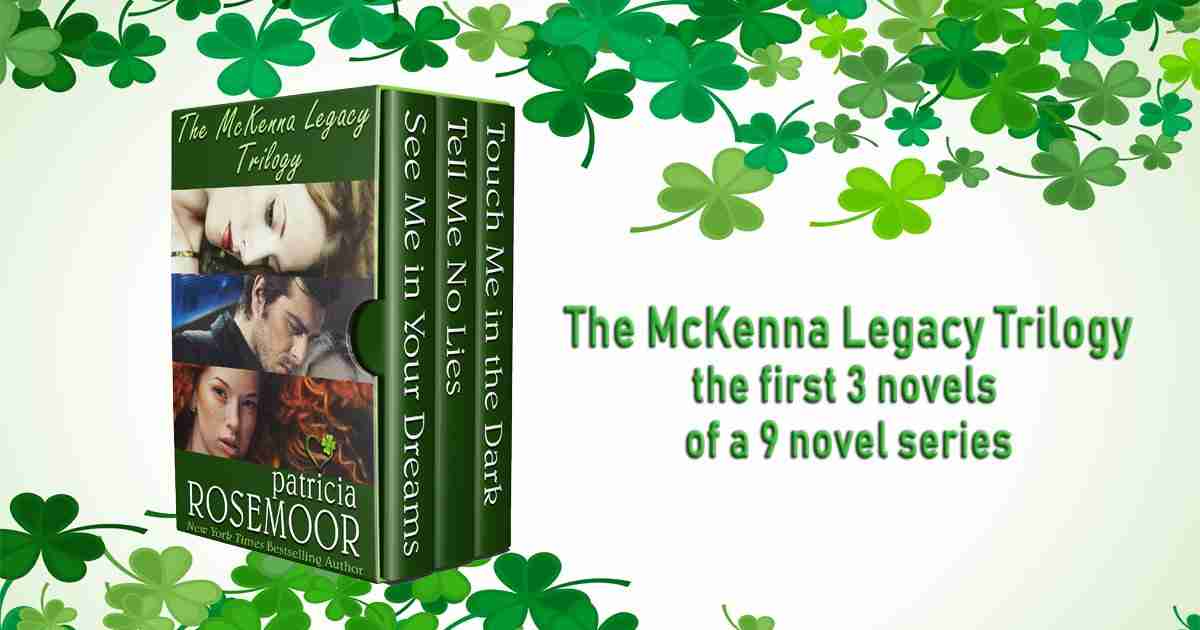 SEE ME IN YOUR DREAMS
Keelin McKenna inherited her grandmother’s ability to dream through other’s eyes, but will she be able to convince Tyler Leighton his teenage daughter is in danger before it’s too late? Tyler thinks Keelin is trying to run a scam on him until she dreams of something known only to him and his daughter. As they work together to find the girl, they can’t fight their attraction or stop themselves from falling in love.
TELL ME NO LIES
Skelly McKenna, host of The Whole Truth, tells a story about Rosalind Van Strattan’s grandmother that makes her angry and worried that her company Temptress will suffer. Digging into the past puts them both in danger even though Skelly doesn’t believe in his grandmother’s legacy. Roz holds the key to the story of a lifetime…one that could make his career…and ruin her family.
TOUCH ME IN THE DARK
Kate (McKenna) Farrell could communicate with the wild horses on the mustang refuge, not in words, but in feelings. So after trampling her oldest friend and mentor, why were the mustangs silent? Someone started the deadly stampede, and Kate suspected Chase Brody, who ran the refuge. They’d once shared passion both for horses and for each other. Now she doesn’t even know if she can trust him.
The McKenna Legacy Trilogy – $2.99 through March 20
Amazon
iBooks
Kobo
Smashwords
One last thing and so important: Please be sure to check out our Authors’ Billboard Monthly Contests for free ebooks, gift cards, and paperbacks. March is going to offer another Rafflecopter, so don’t miss out!