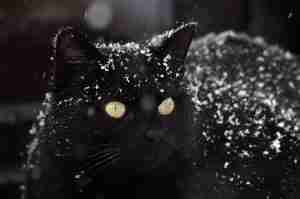 I was recently a guest on author, Teri Polen’s blog and shared some of my superstitions with her readers 🙂

If you’re not superstitious, this featured author may change your mind.  She also confirms why basements in haunted houses aren’t a place you want to hang out.  Welcome Jacquie Biggar!

You’re in a horror movie.  Are you the final person, the first to die, the comic relief, the skeptic, the smart one, or the killer?

I would be the skeptic saying, “Yeah, sure that’s a real chainsaw with blood dripping all over my clean floor. When you’re done goofing off, I hope you plan on cleaning that mess up!”

Creepiest thing that’s ever happened while you were alone?

We lived in a haunted house when I was growing up. My bedroom was in the basement and normally the streetlight would shine through the three windows and provide plenty of light. But, once in a while I’d wake up and literally not be able to see my hand in front of my face. There’d also be a strong, malevolent presence (or maybe that was because I was scared witless!). I’d bang against walls and furniture to get upstairs, my heart drumming right out of my chest, and the light would be on outside. I could see it through the bay window and its glow lit up the kitchen.

Most scared I’ve ever been.

Isn’t everyone? J I won’t walk under a ladder. If a black cat crosses my path, I’ll figure a way around it (tricky since we owned black cats!). If I spill salt, I don’t just throw some from the shaker over my shoulder, I scoop up the spill and throw it too. (Sorry, guy in the next booth!) Friday the 13th is the worst. I’m always waiting for something bad to happen. Some events from history include: Buckingham Palace bombed Sept 13th, 1940, a thirteen-year-old was struck by lightning Friday the 13th at 13:13, a cruise ship ran aground off the coast of Italy, and Flight 571 crashed in the Andes leaving its survivors to commit cannibalism.

What is the hardest part of writing?

No really, between social media, my pets needing attention (I have a calico and a German Shepherd), watering my plants because we’re under drought conditions and I can’t stand to see them die, visiting my mom each day, cleaning the house (if I have to J), making DH dinner and packing his lunch, and watching my favorite TV shows (There’s at least one each night) I have to force myself to sit down and concentrate on the book. And that’s not counting promo stuff.

Writing IS a full-time job and it’s important to slot out a timeframe that works- for you. Just because Betty-Lou has great success writing at 5 am (Oh, my gosh!) it doesn’t mean that will be your productive time. Heck, I don’t even function until I’ve downed three or four cups of coffee. Some write every day, and others only on the weekend. It’s all about finding the lane that works for you, and then sticking to it because you’re the only one who can create the magic.

Who or what has influenced your writing, and in what way?

My critique groups have changed my way of writing. I belong to two fantastic groups. A local one where we share our work via email and meet once a month for an exchange of ideas, industry information, and gossip. J And an online group through the Kiss of Death RWA Chapter called Lethal Ladies. I’ve been the coordinator there for two years and value their insights immeasurably.

I feel critique groups and beta readers together make for stronger, cleaner storylines. After all, you want your book baby to be all that it can be, right?

I’m lucky enough to be able to work full-time towards a successful writing career, which means I can spread my jobs throughout the day. I start by reading and commenting on my blog and those that I follow (don’t take this lightly, the blogging community is huge and they can help you if you’re willing to put in some effort), then I move on to Facebook, Twitter and my emails. After that, I take a break for family and pet-time.

The bulk of my writing takes place in the evening. The house is quiet and I can concentrate on my work. It drives me nuts to have the television on while I’m writing. I guess I’m an all or nothing kind of gal, lol.

And check out my other #audiobooks here: https://www.audible.com/author/Jacquie-Biggar/B00MSIJQBG

She didn’t expect to land in the crosshairs of a serial killer.

Can two displaced angels save a woman from the clutches of a vicious psychopath?

When Julie Crenshaw is offered a news reporter’s job on beautiful Vancouver Island she didn’t expect to land in the crosshairs of a serial killer.

Connor O’Rourke has seen his share of human depravities during his fourteen years as a homicide detective, but is still sickened by the murderer terrorizing his island shores.

And threatening his key witness.

As the stakes rise, can two people get a second chance at love?

Or will a killer be the winner?

Julie pulled into the paved driveway and parked in front of the single car garage just as the school bus stopped down the street and let off a rag-tag bunch of laughing, talking kids. All except her boys, last to step down from the vehicle. They barely glanced up from their inspection of the sidewalk when the doors slid closed and the bus signaled away from the curb.

She sighed and waited while they trudged the half block to their front gate. There were no waves or yelled plans to join the other kids in a game of street hockey after their dinner. No suggestions of an impromptu basketball match using the hoop above the garage door, or a bike ride to the nearby park. Nothing at all. In fact, Dustin looked like he had another of his perpetual mad-ons happening, with hunched shoulders and downcast expression. Meanwhile, Freddie tagged along behind, casting envious glances at the neighbor boy running down the street toward the others setting up for the hockey game.

“Why can’t we, Dusty?” Freddie tugged on his older brother’s jacket, barely slowing him down. “I want to play.”

Dustin stopped short, glaring at the laughing kids down the block. “They’re a big bunch of dummies.” He kicked at a stray pebble, sending it skittering down the walk.

Julie hiked her satchel higher on her shoulder and closed the car door. Dustin glanced her way, then trudged into the house without a word.

Julie’s welcoming smile flat-lined, her son’s continuing anger creating a hard ball of tension in her gut. She’d taken him to counselling after his father’s death, but it hadn’t done much to alleviate the guilt he carried. He felt the accident was his fault and nothing Julie could say would change his mind.

“Mom, can I go play?” Freddie giggled as the neighbor’s dog dropped a beat up ball glove at his feet.

She forced a cheerful expression and held out her arms. “Do I get a cuddle first?”

Young enough not to care who might be watching, he ran into her embrace, his chubby arms wrapping her waist in a bear hug. She held on a moment too long, reluctant to give up the scent of bubblegum and sun that clung to his soft skin.

“Mom, you’re squeezing me to death,” he laughed into her chest.

She gave one last clench, half teasing, half desperation, and let him go. “Be back in an hour, and watch out for traffic.”

“Okay, love you, Mom,” he said, grabbing the glove and heading for the street, his attention already half a block away.

“Love you, son,” she answered, and he was gone. Leaving her alone. Deflated.

She turned for the house, coming to a halt when she noticed Dustin standing on the other side of the screen. There was that knot again. Much as she loved her eldest son, Julie hated the undercurrents that ran between them like a tide of noxious gas. He’d been daddy’s boy, had followed Mike wherever he went, questions flying a-mile-a-minute. They’d often joked that the only time Dusty was quiet was when he was asleep.

She missed her husband every day. 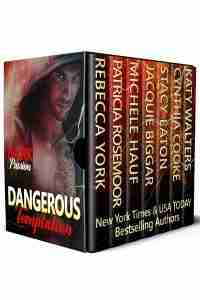 SEVEN Paranormal Romances to feed your appetite for danger!

Step into worlds with exotic and extreme beings, where emotions are heightened with a mixture of fear and passion. Become one with the Dangerous Temptations as you get to know the werewolves, vampires, faeries, shapeshifters, and nefarious ancient pharaohs who sneak into your mind, teasing and titillating, building your hunger for paranormal lusts that mere humans cannot resist.

Or email her via her web site. Jacquie lives on Vancouver Island with her husband and loves to hear from readers all over the world!

You can also join her street team on Facebook: Biggar’s Book Buddies

Or her exclusive Review Crew: https://jacqbiggar.com/join-my-review-crew/

3 Replies to “Are you Superstitious? #Inspiration #amwriting #mgtab @jacqbiggar @mimisgang1”