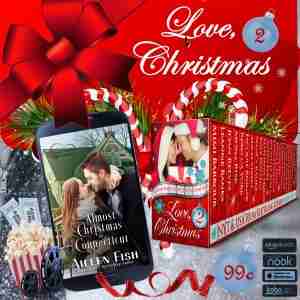 The movie involves a war hero who’s invited to spend Christmas dinner with the cooking columnist whose articles nourish his spirit while he recovers in hospital. I brought the story into the twenty-first century by making the soldier female, and her love interest, a video blogger.

One of the things I love about the movie, besides starring Barbara Stanwyck, is the madcap mishaps caused by the fact the columnist can’t cook, and the additional premise maintained in her column that she’s married and has a baby. I’m not sure if there’s a specific trope for those; it’s not mistaken identity but false pretense creating conflict. This can often lead to trust issues, but following in the movie’s spirit I focused on the opportunity presented by the truth.

I already knew the hero, Tanner Frost, as his brothers have been finding love in my Small-Town Sweethearts series. I needed a heroine, though. One who currently served in the military, and who could mistakenly be described as a wounded warrior. I reached out to readers for some suggestions and realized how important it was to get Winnifred “Fred” Carmichael right, and not insult the entire military community and all of our true heroes. How could I portray Fred as an injured soldier in a silly, short romance without trivializing the work of so many men and women?

I turned to my high school best friend’s big sis, LTC Karen Maskew, USA, Ret. For guidance. With her help, I fleshed out Fred and how she came to be invited to spend Christmas with Tanner.

Here’s a tease from the book:

Tanner had a wild urge to cross his eyes and stick out his tongue when yet another woman snapped a picture of him as he waited outside the arrivals gate at Bradley International Airport. He put up with his aunt’s idea of starring in a video cooking show, but he hated the celebrity that came with it. If he signed onto his social media accounts right then he’d see his face plastered repeatedly on his timeline holding a sign that said Fred.

Fred. Who named their kids that? Tanner had his aunt to blame for his being in the airport, too. She’d come up with this great promo idea by having some soldier come to the farm for Christmas dinner. Somehow they’d have to keep Fred from discovering Tanner was just the front man for the vlog. His aunt did all the cooking, but she claimed her face wouldn’t draw the following his would. And she’d been right about the number of fans.

Scanning the arriving passengers, he looked for a guy in uniform. Or fatigues. Whatever a soldier would wear to travel.

A tall, slender woman on crutches stopped in front of him, letting a duffle bag drop beside her. “That’s me.”

“I beg your pardon?” He wished she’d just take a photo and move along. The number of people coming and going were growing on his nerves.

He ducked his head, dropped the sign and reached for her duffle bag. “Sorry, I expected a guy.”

There was no mistaking her for a guy. She was clearly fit but had noticeable curves. He liked the look on her. He’d bet if she took her auburn hair out of the bun she wore, it would reach her waist. He wouldn’t mind seeing her all dressed up.

Hefting her duffle bag, he guessed she hadn’t brought a fancy wardrobe, which suited him fine. He had no idea what his aunt planned for their week, but it wouldn’t include clubbing or fancy restaurants. Their vlog was about home cooking, so there would be lots of that.

Luckily he’d found a parking space not too far from the arrival gate, since they had to move slowly to accommodate her crutches. She slid into the truck with a lot more grace than he could have pulled off, and he tossed the crutches in the back.

He didn’t talk while driving the maze they called an exit at the airport, but then settled back and relaxed. “So, you’re from Mississippi?”

“National Guard,” she answered, laughter obvious in her voice. “I’m guessing you knew as much about this as I did.”

He ducked his head again and glanced out the side window. “Yeah. My aunt handles the behind-the-scenes stuff. You didn’t email her?”

“No, that would be my niece. She’s six. I’m so embarrassed! She said she wrote that I was a wounded soldier.”

Pointing at the navy canvas boot over the cast on her left foot, he said, “There is that.” He grinned and she smiled back.

“Wounded soldier gives people the idea I was injured in combat. The only thing I was fighting was the pile of rubble when a church got hit in a tornado. We didn’t even arrive until an hour after it passed through the town.”

“So you rescue people from disasters? That’s impressive.”

“It sounds bigger than it is in reality.” She seemed determined to belittle her part in the Guards. “We don’t get called out often, which is good because it means people don’t need our help. I’m really a tester at a cheese factory.”

Well, that was different. “I don’t think I’ve ever met a cheese tester.”

“Are you a follower of the vlog?”

Her mouth twisted to one side. “Um, do I get sent back home if I say no? I really don’t want to disappoint my niece. She wants a picture of us together, by the way.”

Her answer relieved him, if he was honest with himself. Aside from the need to keep her from finding out how little he really cooked, he wouldn’t have to put up with starry eyes and heavy sighs. He could be himself, as long as she didn’t have her phone handy to snap random photos.

USA Today Bestselling author Ari Thatcher is the naughty side of sweet romance author Aileen Fish. Ari has always loved sexy romance where love takes the leading role. Reviews have called her work “captivating” and “compelling”, and her characters “intelligent, intriguing and realistic.”

USA Today Bestselling author Ari Thatcher is the naughty side of sweet romance author Aileen Fish. Ari has always loved sexy romance where love takes the leading role. Reviews have called her work “captivating” and “compelling”, and her characters “intelligent, intriguing and realistic.”
View all posts by Ari Thatcher →