So This is Christmas is one of the twenty stories included the Love, Christmas boxed set.

I picked the title So This is Christmas, by John Lennon, because I have always loved this song. The passionate lyrics and melancholy tone is reflective of the man himself. Listening to words, I get the feeling he’s pouring his innermost thoughts on the paper as he writes. It’s Christmas, another year has ended and you’re about to start another one. So, what have you done in the past year? Have you accomplished anything worthwhile?

The main character in my story, Annabelle Lee, does a bit of reflecting on the past herself. She’s given up everything to build her photography business and it’s going well, but lately she has begun to wonder if it was really worth the sacrifice. Her annual Christmas weekend with her best friends—the girls she’s known most of her life—is coming up, so she decides to arrive at the cabin a few days early to relax in front of a crackling fire, sip wine and contemplate her future. When she arrives, however, things don’t turn out the way she has planned.

But, then, do they ever?

Annabelle Lee—She’s looking forward to a weekend of catching up, munching cookies and enjoying Christmas cheer with her childhood girlfriends. She hasn’t had a vacation since this time last year and desperately needs the time off. Her business has taken a toll on her life, leaving her exhausted and questioning the price of success. She arrives early at Ellie Stone’s family cabin to relax and decide the direction of her future, but to her dismay, she’s not alone. Ellie’s twin brother is also there and declares he isn’t leaving until Friday.

Christopher Stone—He’s the boy who mercilessly teased her when they were kids. He’s grown into a handsome man with a career in professional baseball and a pop-star girlfriend. He appears to have an idyllic life, but the longer they talk, the more Annabelle suspects his love life isn’t as perfect as he claims. She can’t deny her attraction to him and knows he’s attracted to her as well.

Best Friends Forever—Will this week proceed like old times or turn out to be the beginning of a new chapter in her life?

So this is Christmas is one of the twenty stories in the Love, Christmas boxed set. It’s on pre-order now at only 99 cents. It goes live on Tuesday, October 18th so reserve your copy now! 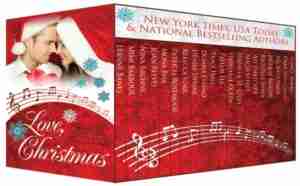 Hey, there! We’re having a Facebook party on October 17-18 (1 pm to 6 pm EST) to celebrate the launch of Love, Christmas, and you’re invited! Two fun-filled days of appearances by all of the Love, Christmas authors, games and lots of prizes. Come and join us, and bring a friend!

See you at the party!

Denise Devine is a USA TODAY bestselling author who writes sweet romantic comedy and inspirational romance. She is currently writing two series, Forever Yours (Inspirational) and Counting Your Blessings (Christmas romantic comedy). You can visit her at www.deniseannettedevine.com.

Denise Devine is a USA TODAY bestselling author who writes sweet romantic comedy and inspirational romance. She is currently writing two series, Forever Yours (Inspirational) and Counting Your Blessings (Christmas romantic comedy). You can visit her at www.deniseannettedevine.com.
View all posts by Denise Devine →

One Reply to “So This is Christmas by Denise Devine – From the Love, Christmas Boxed Set #mgtab #holidayromance”